Maysa has released her latest album “Motions of Love” last week that is already holding the #1 spot on the R&B charts for iTunes.  This being her 9th solo album, I feel it’s one of her best.  I’ve been a fan of hers since the album “All My Life“, which was released in 2000.  I have been a willing captive of her voice, style and beauty since then.  With this latest album, it seems that has a more Neo Soul or relaxed Soul feel than previous albums.  I love it.  Her first single to be released is “Have Sweet Dreams”.  It was co-written by Stevie Wonder.  Which is a huge deal by it self.  Listening to the song, you can definitely hear where Stevie Wonder left his mark on the song. You can listen to the song below, but please don’t stop there.  The whole album needs to be heard to appreciate the complete, total experience Maysa is offering to you.

This beautiful brown poet and songstress is a delightful soul to speak to, and incredibly talented.  I had an opportunity to interview this Goddess from Chicago, and was relieved to find that there was still, yet another artist who despite the compelling circus of the mainstream, remains true to herself and true to the legendary craft of creating timeless SOUL.

Find the audio interview below, along with her bio and links to learn more about her and her art…

Video links: (these are performances and interviews)

Brooklyn-based artist ArinMaya is a singer/songwriter with her soul wide open. Her style cannot be contained but is often characterized as graceful and healing, whether she’s scatting through standards, riffing to R&B or improvising over electro-beat. Her voice culls audiences to remember the sensuality and mystery of Sade, the deep hurt of Billie, and the wisdom of Nina. And her songwriting sends audiences to a hopeful, sometimes private place where they are comforted, satiated and affirmed.

Hailing from Chicago, ArinMaya was born into the arms of two music-loving parents whose record collections spanned from Paul Simon’s Graceland to almost every album released by Sweet Honey in the Rock, from show tunes like Ain’t Misbehavin’ to Pharoah Saunders and Stevie Wonder’s entire discographies. From age 5 she wanted to be in every choir possible, and she was. ArinMaya participated as section leader or soloist in Trinity United Church of Christ’s children’s and youth choirs, the Chicago Children’s Choir, the Community Renewal Society’s All God’s Children and every single choir she could join in high school at the Latin School of Chicago. She even gave strong voice to the teenage and women’s drill teams at church, filling the 3,000-seater sanctuary (sans microphone) every other Sunday with “I’ve got a feeling, I’ve got a feeling church, I’ve got a feeling the TUCC drill team’s gonna step for Christ.”

In college at Howard University, her focus was studying, but she did get to stretch her lungs out for Delta Sigma Theta Sorority as a song leader and briefly in Howard’s Gospel Choir, then led by Richard Smallwood. A year-long exchange at Stanford allowed the songstress to join the popular Everyday People a cappella with whom she toured and recorded an album.

Though music was never far from her mind, it took a few years of dedicated yet unfulfilling work in New York for her to step out onto the tightrope of her dreams. At the end of 2007, ArinMaya took the bold step of leaving her job to leave for Paris—city of light. While in Europe, she also visited Berlin so that by the time she was heading back to the states, she had explored and become more comfortable with performing solo for audiences at such venues as The Swan Bar, Le Blue Note, and Cotton Club Berlin, sharing the stage with artists like Mario Canonge, Catia Werneck, and Fumi Tokie.

ArinMaya’s return to the states only confirmed she had been traveling in the right direction and she has been writing, collaborating and performing ever since at venues such as Brooklyn’s Joloff Restaurant, D.C.’s National Cherry Blossom Festival, and New York’s world-famous Blue Note, to name a few.

Her debut recording, The Sound of ArinMaya, was released in Spring 2010 and continues to be well-received and downloaded by audiences worldwide. 2011 will prove to be even more exciting, as the singer plans to release her first full-length recording with long-time collaborator and guitarist, Nick Cassarino, as well as some other collaborative projects.

ArinMaya has grown and continues to grow into a widely sought after artist and looks forward to spreading her love for the craft and artistry of music to audiences worldwide.

Finally after playing the ish outta his single “Fuck You” I got my hands on the highly anticipated 3rd solo studio album by Cee Lo Green which drops November 9th, 2010 and you know I had to send it to our Dj Smoke1 to mix up for your listening pleasure.

Listening to the whole album it’s almost hard to believe this was recorded in 2010 because it has a very soulful Motown vintage feel from the many ways Cee Lo sings to the production arrangements that back his vocals. I sent the album over to my boy Shawn Harrison of the hit tv show Family Matters to get his thoughts on it and he even liked the album which is a pretty good compliment being that he’s not a Cee Lo fan and pretty much hate’s most the artist I love. lol My favorite song by far on the album aside from the hit single “Fuck You” has to be #10 “Fool For You.” The beat has a dope Earth Wind and Fire funk sound about it and Cee Lo’s singing style in this one is nuts the way he transitions from an in your face head sway style to convince everyone why he’s a fool for the woman he’s singing about to the smooth out crooner style when the hook comes to my favorite part via the way he sings the “YOU!” parts. This one has definitely been on repeat. Something I noticed that the version of #8 I Want You is totally different then the one I featured awhile ago. All the lyrics are the same he just sings them way different more at a slower tempo and the production to match. I def like the other version a lot better. Also his rendition of  Georgia didn’t make the album that I featured here as well which makes no sense to me because that single is dope and totally reps the place where he comes from. Oh well you can download them both at that “here” and add them to the album when you purchase it.

I highly suggest picking this album up on the 9th if you want some “instant vintage” and to hear Cee Lo in a way and style like you’ve never really heard. Dude is mad talented and has come a long way since his hip hop group Goodie Mob.

10. Fool For You Ft. Philip Bailey

Lee? Yes, Lee.  Don’t know him?  Let me introduce you.  Lee is a an artist that has no definitions or genres that bind him.  He is a everything from a singer to poet to songwriter to rapper.  The reason I’m introducing you to Lee, is not just because of his new album “Naked”, that is to be released on October 26th.  It’s also to introduce you to an artist that has a body of work that allows you to draw from, and then listen to “Naked” with a reflection of how Lee arrived at this point musically.

Quite Possibly The Best Of Square Egg (2005)

Here is a sample of their music.

Now, in 2008 Lee released his first solo album “Meet Lee (2008)“. This solo project set the fertile soil for the creative seed that bears fruit in the new album “Naked”.  It was a 17 songs that really talents and the breadth of his reach musically.  That’s another thing about Lee, that I truly admire.  He gives you an album.  Not a 6 or 8 song sampling, but a full album.  His new album has 22 songs. When is the last time you picked up an album that wasn’t a greatest hits or mixtape what had 22 songs? Was it Prince’s B Sides release? :)  Yes, it’s been that long.

To help spread the word of the new album’s release he has two singles.  The first is “Alone” and then “? (Love)“. Out of the two, my favorite is “? (Love)”.  Both should hold you till the album is released on the Tuesday, the 26th.  Also while you’re waiting, check out the previous albums and take the time understand and appreciate Lee and The Square Egg.  It will make the enjoyment of “Naked” so much more pleasant. 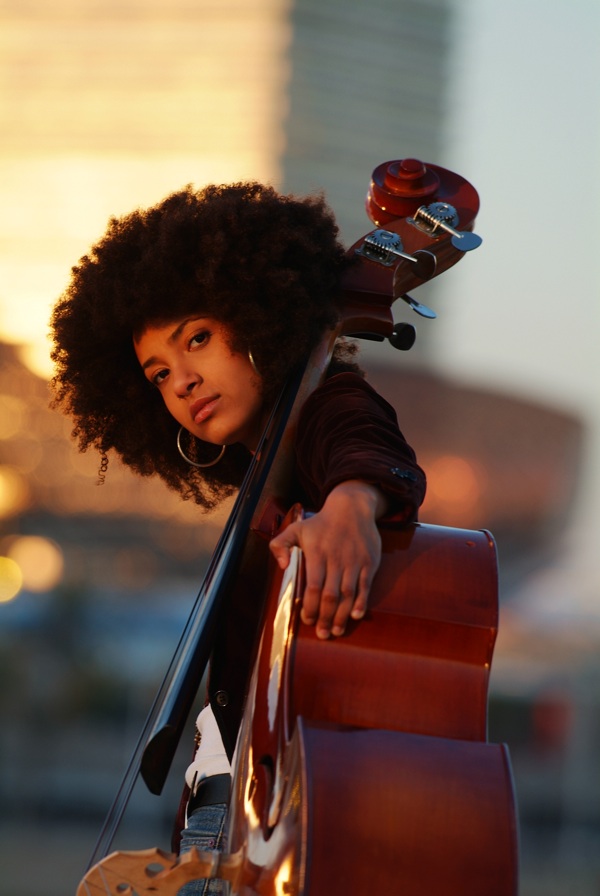 Morning all.  Today is hump day, and I bring forth an artist that has a light, Jazzy, and fun vibe to it.  Her name is Esperanza Spalding. As a 23 year old acoustic double bass musician, you know she is something special.  She is from Portland, Oregon and start playing when she was 15.  Her first album “JunJo” was released in 2006, and her 2nd and my favorite, “Esperanza” was released in 2008.  Now, some songs are in Spanish, and some are english.  As with great music, it speaks through the language barriers, and you will enjoy.