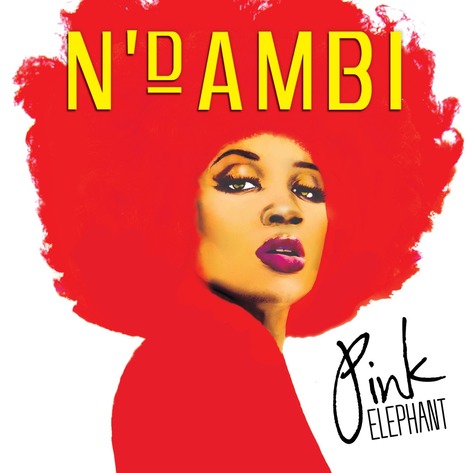 Today is a great day for Soul music lovers.  We have albums from Meshell Ndegeocello and N’Dambi, and singles from new aspiring artists.  After almost four years since her release of “A Weird Kinda Girl” in Japan on CoCo Red Music, N’Dambi has released a twelve track album “Pink Elephant”.  This album is released by Stax Records, who also is home to Teena Marie, the late Isaac Hayes, and Will Downing, among others.

Now you may ask, what’s the deal?  Is it worth picking up? I can answer that confidently with a YES for fans, and a maybe with new listeners.  Let me explain.  I’m an uber fan of Soul music, and digest large amounts of Soul music on a weekly basis. I compare, search for rare, and contemplate Soul music. When I first listened to this album, I was confused.  The first song “L.I.E.”, was an anomaly, since it didn’t have the feel of a first track of an album.  For example, Ledisi’s “Lost & Found” first song “Been Here” is a perfect example of a great “lead in” to the album. I thought that “L.I.E.” didn’t “lead in” to the album and establish the environment for the rest of the songs.  I was a bit confused and wrong, since I didn’t know what expect from the rest of the album.  After listening to the whole album, do I understand and appreciate the style and concept of it.

To best describe this album, is that it’s a book of different stories, by different writers, but with the same voice. Each song tells a story, but it tells it in a form of Soul that compliments that story.  For example the relaxed tempo of “L.I.E.” lends itself to the story of a man with two lives that are connected via the Long Island Expressway.  One of my favorites of the album is “Nobody Jones”.  It’s more of upbeat, than “L.I.E.”, and tells of a woman that dreams of a more exciting life.  This is the track that I think really showcases N’Dambi’s voice and what she has to separate her from other singers. Oh, that cow bell is kicking in this song.

The next song is “Ooo Baby”, and is a prime example of her Soul style changing from song to song.  If you close your eyes, you can see Levert from about twenty years ago, behind her in white suits,  snapping their fingers, and grooving to the rhythm.  This song will get the mood right, if it isn’t there already.

The first single from the album is”Can’t Hardly Wait” (clean version video below).  There are two versions of this song.  I prefer the NSFW version (Not Safe For Work) myself.  In the clean version, “Fussing” has replaced “F*!king”. Besides that small change, the song is one of the best of the album.  I really can’t place the influence for this song, but I can appreciate the bass guitar in it.

Overall, I like the album.  I don’t regret buying, but again I’m a uber fan.  If this your first time hearing N’Dambi, I would suggest picking up “Lost Little Girl Blues” from 1999.  Then move up from there.  Then you can realize what’s being done in “Pink Elephant”. Now if you are a fan, it’s no question.  What are you waiting for?  It’s available all over at iTunes and Amazon.  Enjoy.