Good morning people.  Going for a different vide today.   Afi Soul (pronounced ah-FEE) is singer that is from the Washington, DC area.  She has a very soft sensual voice that  lull you into a relaxed state.  She performs mostly on the East Coast, and has won many local awards for her voice and talent.  Afi has one album, which is “Lovely“.  It was released in 2007.  She is currently working on new material to be released.  Anyway, on to the music. 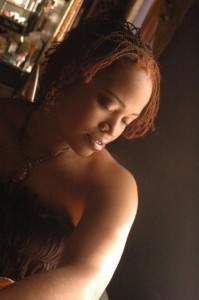